BCL11A is a Krüppel zinc-finger transcription factor identified originally from a chromosome translocation in aggressive B-cell chronic lymphocytic leukaemia. The gene may function as both an oncogene and a tumour suppressor. Alternative splicing generates multiple isoforms, the BCL11AXL being the largest and most abundant transcript. The protein is differentially expressed during B-cell development and is strongly expressed in plasmacytoid dendritic cells. The BCL11A/123 antibody specifically recognises the extra long form of the protein and not the long or short forms of BCL11A. The BCL11A/123 antibody is not cross reactive with the long form of the BCL11B protein that shares significant sequence identity with the immunogen.

Pulford K, Banham AH, Lyne L, et al. The BCL11AXL transcription factor: its distribution in normal and malignant tissues and use as a marker for plasmacytoid dendritic cells. Leukemia. 2006;20:1439-1441. 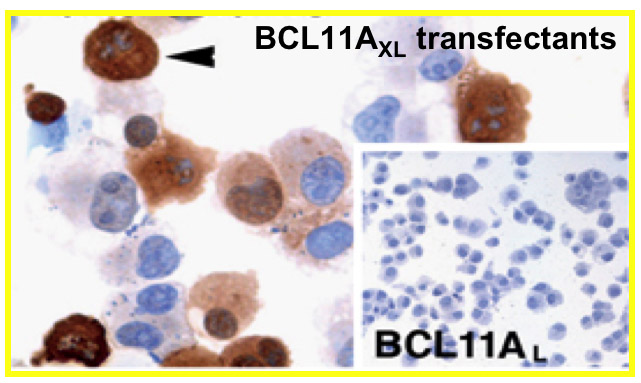 Tonsil staining of BCL11AXL with BCL11A/123
BCL11AXL is present in tonsillar B cells (brown) in germinal centres and mantle zones. Double labelling studies show the strongly labelled cells in the interfollicular areas to be CD123-positive plasmacytoid dendritic cells (arrowhead). 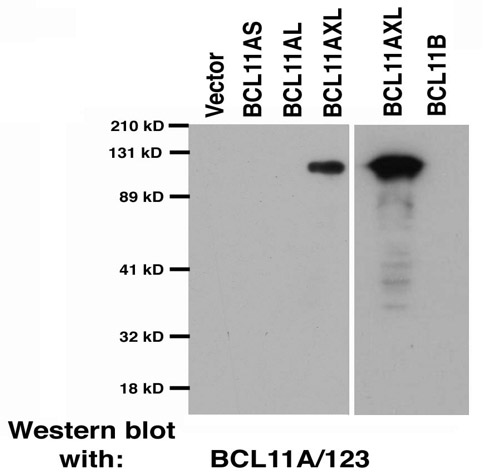