CD38, a type II transmembrane glycoproteins originally identified as an activation antigen of T and B cells. It is expressed on several leukocytes and early hematopoietic precursor cells. This molecules is also expressed in nonhematopoietic cells, including epithelial cells and astrocytes. CD38 is an ectoenzyme that catalyzes the synthesis of cyclic ADP ribose (a potent second messenger for Ca2+ release) and a receptor that initiates transmembrane signaling on engagement with its counterreceptor CD31 or with agonistic mAbs. The effects mediated by CD38 include the production of proinflammatory cytokines, proliferation, and protection from apoptosis in lymphocytes. 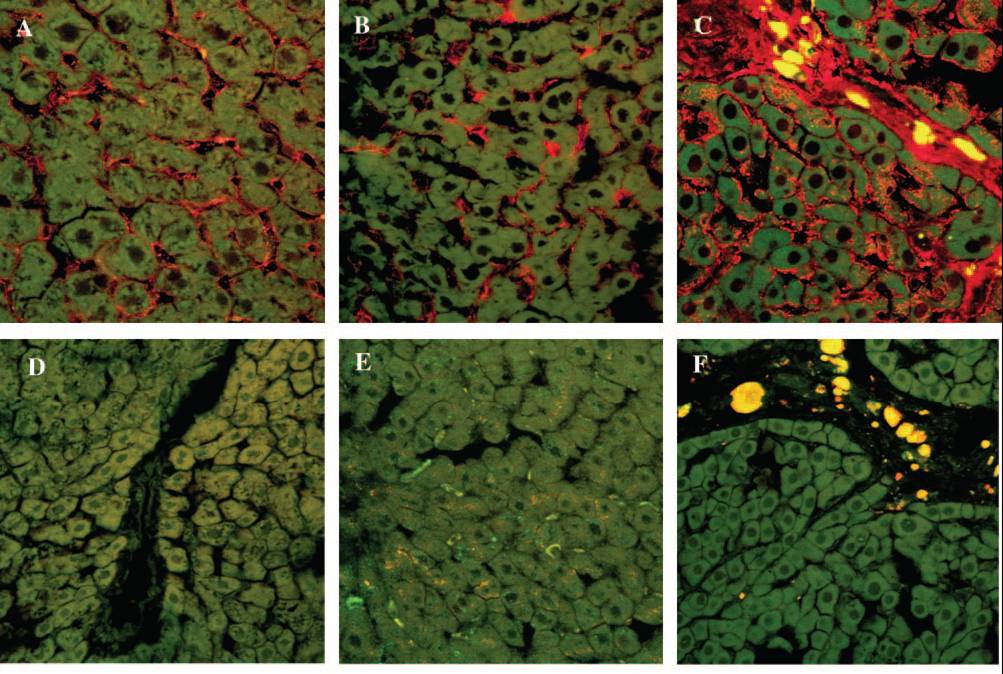 Immunolocalization of CD38 in rat liver sections
A–F: Liver sections of control rats (A and D), rats pretreated with LPS (550 ug/rat) (B and E) and cirrhotic rats with an advanced stage of fibrosis displaying prominent scars (C and D) were stained with an antibody against CD38 (CD38.14.27) (A–C) or with an Ig control (D–F). Liver sections were washed and incubated with an anti-mouse Cy-3-conjugated secondary antibody (red). Hepatocyte autofluorescence from hepatocytes is seen in green. 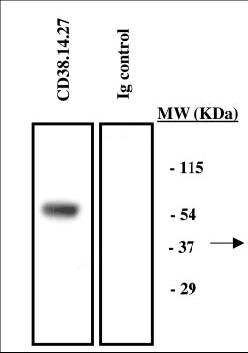 Western blot analysis of the protein recognized by mAb CD38.14.27.

Expression of CD38 on activated HSCs.
HSCs were freshly isolated from control (top) and cirrhotic (bottom) rats. CD38+ cells were gated, and the intensity of CD38 expression was assessed by flow cytometry (FACS) using CD38.14.27 mAb. Fluorescence intensity is shown over a 3-decade log scale.