This gene encodes a potent cyclin-dependent kinase inhibitor. The encoded protein binds to and inhibits the activity of cyclin-CDK2 or CDK4 complexes, and thus functions as a regulator of cell cycle progression at G1. The expression of this gene is tightly controlled by the tumor suppressor protein p53, through which this protein mediates the p53-dependent cell cycle G1 phase arrest in response to a variety of stress stimuli. This protein can interact with proliferating cell nuclear antigen (PCNA), a DNA polymerase accessory factor, and plays a regulatory role in S phase DNA replication and DNA damage repair. This protein was reported to be specifically cleaved by CASP3-like caspases, which thus leads to a dramatic activation of CDK2, and may be instrumental in the execution of apoptosis following caspase activation. Two alternatively spliced variants, which encode an identical protein, have been reported. 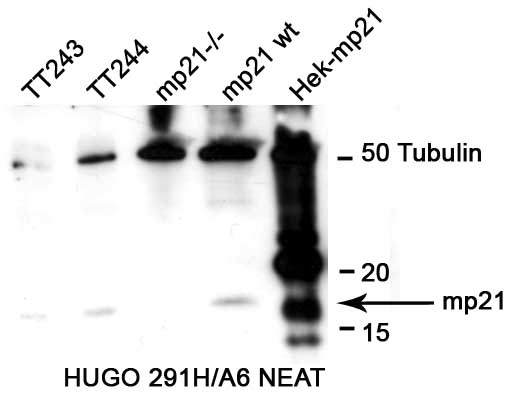