Serine/threonine-protein kinase that performs several important functions throughout M phase of the cell cycle, including the regulation of centrosome maturation and spindle assembly, the removal of cohesins from chromosome arms, the inactivation of anaphase-promoting complex/cyclosome (APC/C) inhibitors, and the regulation of mitotic exit and cytokinesis. Polo-like kinase proteins acts by binding and phosphorylating proteins are that already phosphorylated on a specific motif recognized by the POLO box domains. 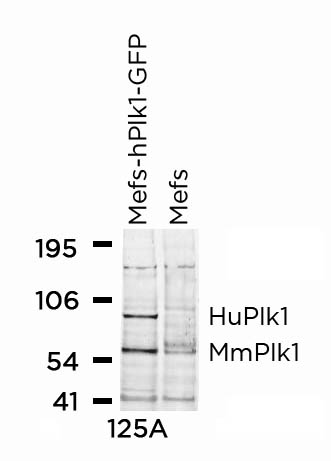 mPlk1 endogenous expression in both lanes