FOXP2 is a member of the forkhead transcription factor. Its mutation is associated with an inherited speech and language disorder and its biological roles have primarily been studied in neuronal tissues. FOXP2 is also aberrantly expressed in abnormal plasma cells and it may play a role in the pathogenesis of multiple myeloma. The FOXP2-73A/8 antibody detects human and murine FOXP2 and does not cross-react with other members of the FOXP family (FOXP1, FOXP3 or FOXP4).

FOXP2 expression in reactive tonsil
Primarily nuclear staining of paraffin embedded tonsillar epithelium is observed (left panel), although there is also some weaker cytoplasmic staining. The absence of FOXP2 expression in tonsillar plasma cells was confirmed by double labelling with VS38c shown in blue (right) 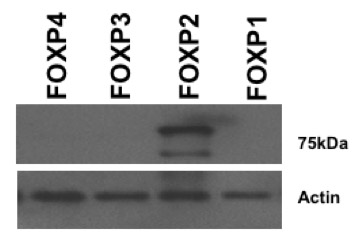 Western blotting of FOXP transfectants
Western blotting of COS1 cells transfected with members of the FOXP family. The FOXP2-73A/8 antibody exhibited specificity for the recombinant human FOXP2 protein. Expression of each family member in the same lysates was confirmed using other reagents (data not shown).

Silencing of endogenous FOXP2
Silencing using FOXP2-targeted siRNA confirmed the identity of the endogenous protein in the JJN3 cell line as FOXP2.