PASD1 was originally identified by our laboratory through screening the antigenic reactivity of circulating antibodies from lymphoma patients using the SEREX technique. Expression studies identified PASD1 as a novel nuclear cancer testis antigen (CTA) with normal tissue expression restricted to the testis and expression also in different cancer types, particularly lymphoma and myeloma. Some patients and lymphoma cell lines were observed to express cytoplasmic PASD1 protein. Patients were shown to mount both CD8 and CD4 T-cell responses to the PASD1 protein and a PASD1 DNA vaccine could induce immune responses in vivo. The PASD1 protein is not highly conserved in mice and the closest sequence similarity is to the CLOCK and NPAS2 proteins. Recently PASD1 has been identified as a novel regulator of the circadian clock that interacts with the CLOCK:BMAL1 complex to repress its transcriptional activation. This suggests PASD1 may molecularly link oncogenic transformation to suppression of circadian rhythms. We have generated two mouse monoclonal antibodies to PASD1. PASD1-1 (clone 2ALCC136) recognises a region common to both long and short PASD1 proteins, while PASD1-2 (clone 2ALCC128) recognises only the C-terminus of the long PASD1 protein isoform. 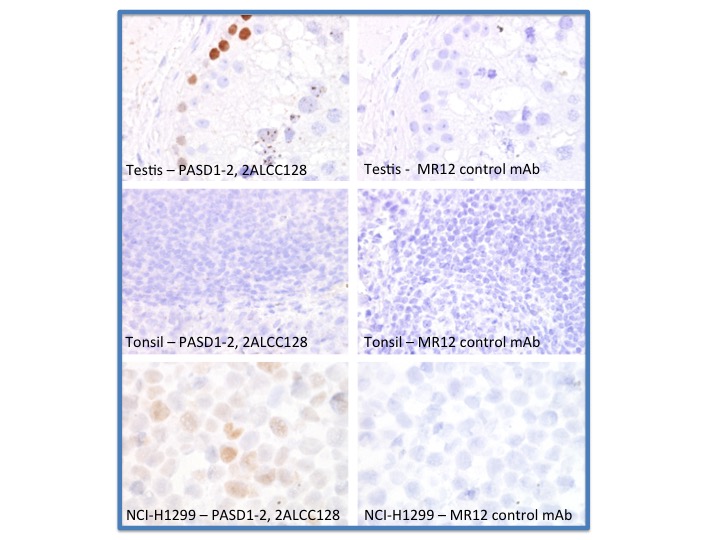 IHC FFPE
Staining of formalin fixed and paraffin embedded human tissues with the PASD1-2 2ALCC128 antibody. Testis shows strong nuclear expression in a subpopulation of spermatogonia near the basal membrane in testicular tubules. Tonsil, like most normal human tissues shows no PASD1 labelling. Nuclear PASD1 protein was detectable in the lung cancer cell line NCI-H1299. The MR12 mouse monoclonal antibody was used as a negative control to demonstrate the specificity of PASD1 staining. 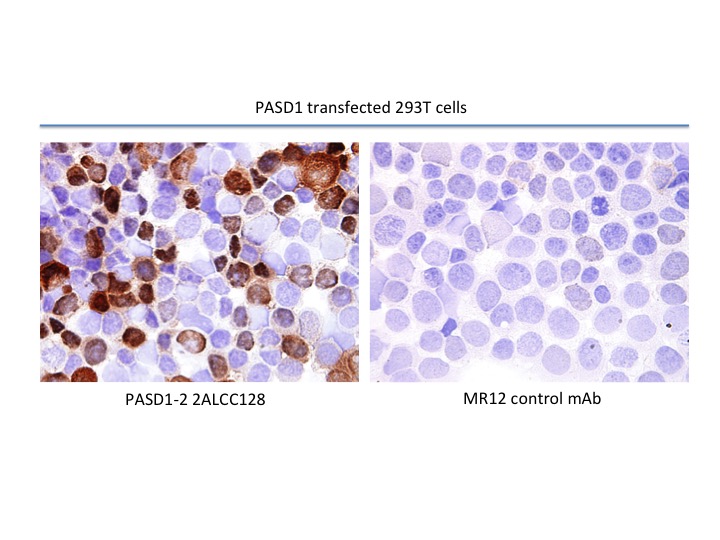 IHC frozen
293T cells were transiently transfected with cDNA expressing the long isoform of PASD1. Staining was performed with PASD1-2 clone 2ALCC128 and MR12 was used as a control antibody to detect any non-specific background. No staining of untransfected 293T cells was observed, data not shown, but note the negative cells in the PASD1-2 2ALCC128 staining which will be those that were not successfully transfected. 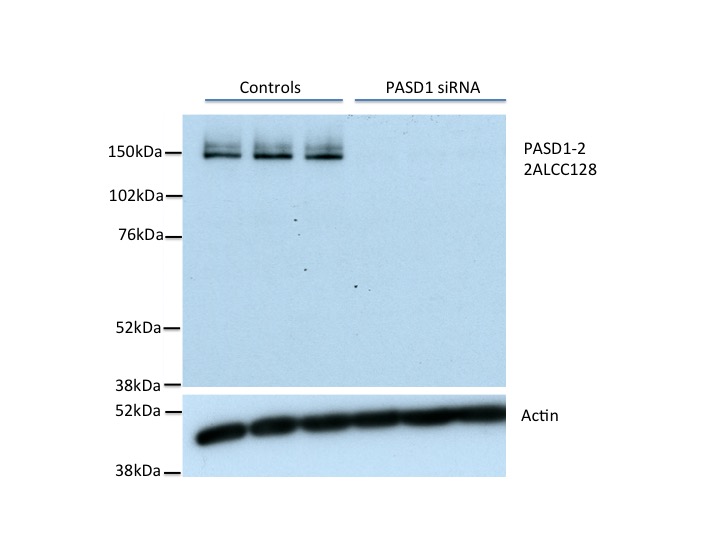 Western Blotting
PASD1 silencing was performed to validate the identity of the endogenous protein detected by Western Blotting in BT-20 breast cancer cells. Controls from left to right are untreated, mock siRNA, control siRNA. Three independent PASD1 siRNAs were tested. These experiments indicate that the endogenous protein detected by PASD1-2 2ALCC128 is indeed PASD1. Experiments in other cell types have given similar results. There may be some variability in the m.wt. of PASD1, 100-150kDa. 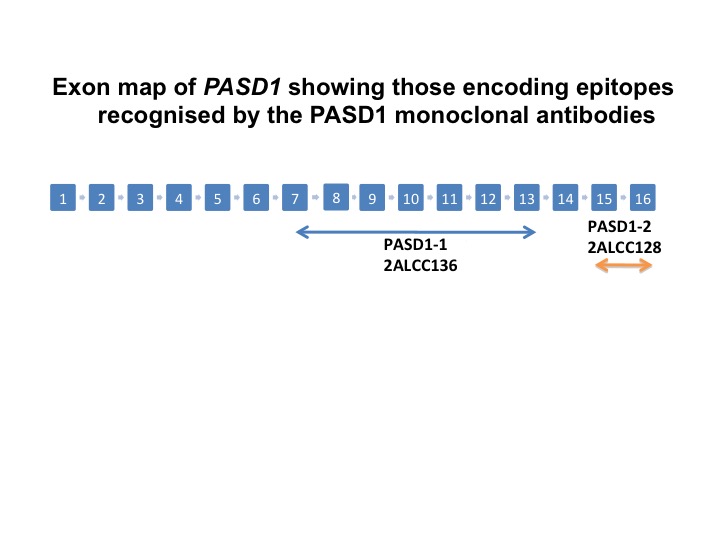 PASD1 Schematic
Diagram showing the exon structure of the PASD1 gene and the regions used to generate immunogens for the production of PASD1 monoclonal antibodies.