Members of the platform 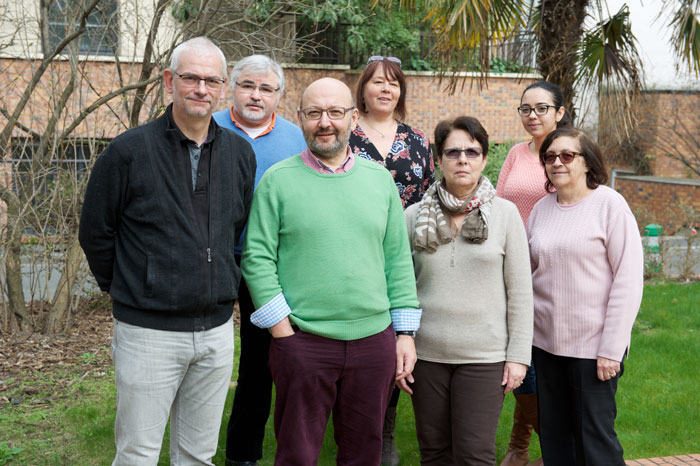 The Platform is mostly devoted to the obtaining of antibodies useful for the pasteurian community. Our activities are focused on murine monoclonal antibodies (mAb) and camel homodimeric antibodies (VHH or NanobodiesTM).

There is a still a large demand for mAbs but we focus the activity on antigens such as polysaccharides, membrane proteins, unstable proteins, on which we gained experience, or on projects requiring close collaboration between teams to select the « right » antibodies by using specific screening which can only be performed by the demanding laboratory.

In addition, the Platform has acquired international reputation for the development of dipsticks for the diagnosis of cholera, plague, meningitis and bloody diarrheas. The technology is indeed well adapted for field diagnosis of tropical diseases, owing to its low cost, simplicity and insensitivity to rugged conditions. The principle of such dipsticks is shown in Fig. 2. As the dipstick is dipped in the biological fluid to be tested, antigen-antibody complexes are formed with the first antibody, which is conjugated to colloidal gold particles. The complexes then migrate by capillarity until they reach the line of immobilized capture antibody, which becomes materialized as a red line. A second line of immobilized rabbit anti-mouse Ig catches gold-conjugated antibodies that did not bind to the first line, and serves as a control for dipstick functioning.

VHHs are complimentary of mAbs in the sense that we demonstrated they are able to recognize non-conventional epitopes, to cross the BBB (Blood-Brain Barrier) and to bind an intracellular antigen. VHHs are useful either for brain imaging, viral neutralization and/or for cristallization studies.

The use of antibodies to detect intracerebral targets in vivo is limited by their reduced ability to cross the blood brain barrier (BBB). VHH, thanks to their small size, their stability and their basic isoelectric point, have the potential to transmigrate across the BBB and could be used as biomarkers after appropriate labeling.

As a proof of concept we have generated VHH against human glial fibrillary acidic protein (GFAP), and we have shown that this VHH E9 was able to cross the BBB following intra-arterial infusion, to diffuse in the brain, to penetrate into astrocytes and to label specifically GFAP (Li et al, Faseb J, 2012).

Then, we have engineered VHHs with an extra cysteine introduced in their C-terminal part to obtained site-specific conjugates. This strategy is particularly appealing for nanoprobes targeting intracerebral antigen as the conjugation should not affect the efficiency of the conjugates to cross the BBB and to reach their intracerebral targets. VHHs specific of the two main features of Alzheimer’s Disease (Aβ for extracellular amyloid plaques and p-Tau for intracellular neurobrillary tangles) have been labeled with fluorescent probes (i.e. AlexaFluor 488) and tested on mouse models of Alzheimer's Disease. The fluorescent VHHs were injected intravenously in the transgenic mice (PS2APP model of amyloidosis or rTg4510 model of tauopathy) and followed by in vivo two-photon microscopy. Very prominent staining of amyloid plaques or NFTs was observed suggesting both anti-Aβ VHH R3VQ and anti p-Tau VHH A2 were capable of passing through the BBB and then reach their specific targets in the brain parenchyma. These outcomes were further confirmed by immunohistochemistry.

Our results demonstrate that three VHHs directed against three different intracerebral targets were able to cross the BBB in vivo after intravenous injection. Their brain uptake over the BBB occurred in three different mouse models (E9: C57BL/6 mice, R3VQ: PS2APP mice, A2: rTg4510 mice). In addition, two of these VHHs (E9 and A2) were able to label intracellular antigens present in astrocytes (GFAP) and in neurons (p-Tau), respectively. These findings constitute strong evidence of transmigration of VHHs through the BBB and labeling of intracellular antigens, thus highlighting their potential for in vivo brain imaging.