Center for the Production of Diagnostic Reagents and for Research and research group Biomedicine
Blood Trasfusion Centre of Slovenia
Šlajmerjeva 6, 1000 Ljubljana, Slovenia
+ 386 1 5438 100

Members of the laboratory 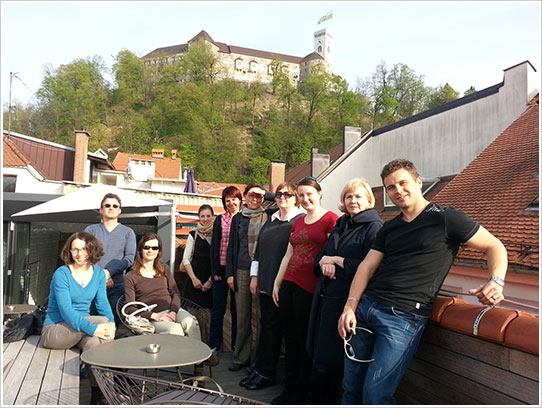 Center for the Production of Diagnostic Reagents and for Research (CPDRR) was established two decades ago. One of its main activities was the production of diagnostic reagents for blood grouping under GMP, based on mouse monoclonal antibodies, which were developed, validated, registered (and later licensed) by CPDRR.

All the time CPDRR has been involved in research activities in biomedical field in Slovenia and internationally with monoclonal antibodies as one of the main research lines (ten research projects and twelve PhDs were ran so far). We have our own animal facility (with permanent permission of appropriate veterinary authority), as well as recombinant antibody/protein facilities.

We are also an important partner of the University of Ljubljana, teaching students about theoretical and practical aspects of monoclonal antibody production and their use in research, diagnostics and in therapy on graduate and postgraduate levels.

A number of monoclonal antibodies were developed, validated, produced, licensed and patented by CPDRR. Besides monoclonal antibodies against antigens of the blood group system AB0, they are directed against cytokines (TNF, p55, p75, MIF), potential new tumor markers and prion protein and its truncated form. In the last case, a panel of mouse monoclonal antibodies were developed in order to: 1) prepare a new generation of diagnostic kit, which was proposed to the EU Commission; 2) study the pathogenesis of the disease; 3) C-terminally truncated form of prion protein, PrP226*, was first described with the help of one of our monoclonal antibodies. In last years, there is a debate about its involvement in neurodegenerative diseases, especially in Alzheimer's disease. Besides development and validation of »in-house« immunological tests for IgA, anti-IgA and IgG determination, which are used in blood bank and diagnostic labs, our group is also developing tools for fully human monoclonal antibody production from immunised donors. A part of our activities is dedicated to recombinant Ab technology development with the main purpose to use the rAb as antigen binding domains in cell therapeutics such as adopted T-cells and stem cells.