Members of the laboratory 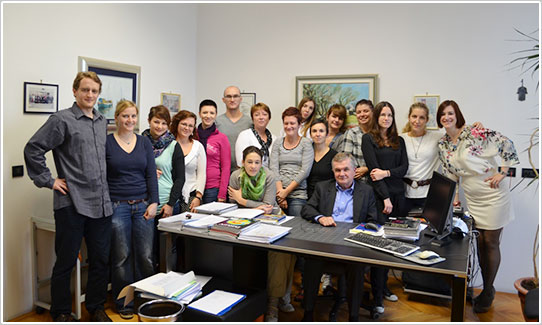 The Center for Proteomics, established in 2006 at the University of Rijeka Faculty of Medicine, is focused on high-throughput monoclonal antibodies (mAb) development for cutting-edge applications, including proteome analysis. It already disposes of a bank with several hundred hybridoma cell lines secreting mAbs to a large variety of target proteins. The Center has participated in more than thirty collaborative projects with prestigious research institutes, universities and biotech SMEs from SE Europe, EU and the USA.

These projects are mainly based on the production and characterization of mAbs for research purposes. In many instances the reagents generated at the Center have played a key role in various discoveries and resulted in joint publications in the leading journals.

The Center's pilot project for the high-throughput production of mAbs was performed on the VZV (Varicella Zoster Virus) proteome. Ever since, the Center has been continuously working on new projects and services, which include: